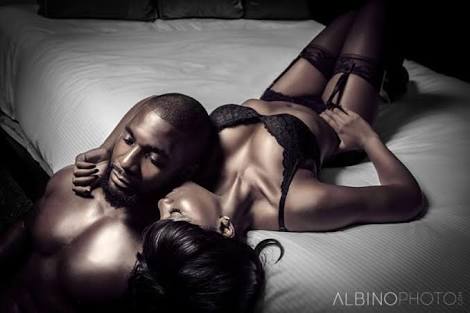 Posted at 18:52h in Erotica by Tife 0 Comments
Share

Continued from; Confession: Moyo & I PT 1

Next he curved his finger up to tug at my vaginal muscle in a slow, steady rhythm. I felt like I was about to explode, but Moyo wasn’t done with me, he thrust his middle finger into me not as slowly as he had the first time, this time I let out an even louder moan. He continued tugging at my vaginal muscle as he brought his lips to kiss me. I shut my eyes even tighter as I kept swinging my legs to the rhythm of the sensations flowing through my body.

Moyo brought his lips away from kissing my lips and took them to my vagina, already soaked and dripping. Without a second thought, he shoved his tongue inside me and his nose brushed through my clitoris. To him I tasted sweet, an innocent kind of sweetness, like rich creamy milk. The fluid from me gave his tongue that silky texture he loved and when he was done tasting me from beneath, he came back up to kiss me. We kissed so passionately, drowning in each other fluid. He was ready and so was I.

Without further ado, he thrust his penis in me, letting out a soft roar as he slid into me. I held on tightly to the bedspread, and curved my legs tightly to his back as he made love to me. The slow steady strokes soon turned fast and furious, and when it seemed like he was no longer hitting my G-spot, he turned me over so my back could face him. I was very familiar with this move, I smiled, knowing this was something I thrived in.

With my back to him, I knelt on the bed, Moyo knew what to do without being told. He took his place behind me, bringing his right arm to my front, he made them rest across my collar bone. He also brought his left hand to my front, but he allowed them rest across my pelvic, and with that he pulled me tightly to himself and guided his penis into my vagina. The bed mattress was stable enough to accommodate our activities, so he was he was able to go in and out of me with ease. The feelings were super intense, our hearts was probably racing faster than a power bike on the highway, Moyo didn’t realize he was already choking me.

All of a sudden I could barely breathe, and I was gasping for breath, my mouth were dry from using them to draw in air, my vision were failing me and I was shaking uncontrollably. I felt a sensation of hot and cold at the same time and Moyo massaged my clitoris even harder, I screamed with a low pitch voice and all of a sudden I exploded, gushing out with a clear, odorless fluid as I reached orgasm.

My confession is over. Probably one day, I would show my sister this confession, and she would know that her darling husband was mine before he became hers. This is my confession.