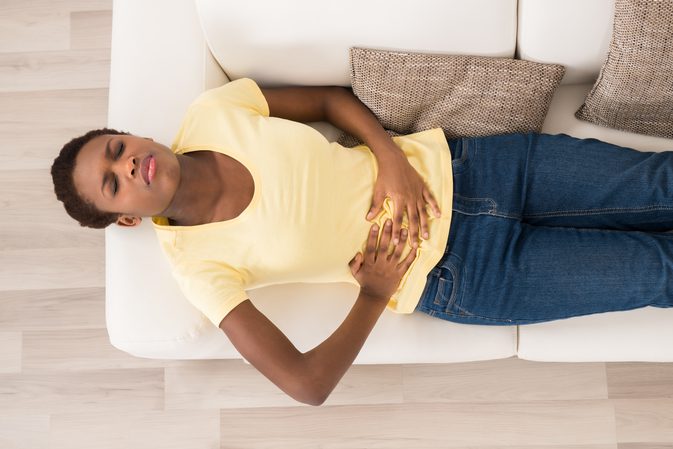 Posted at 05:45h in Health by Lara 0 Comments
Share

The first time Amaka (name has been modified) knew she was pregnant, she almost fainted. Not from the news that her frequent act of unprotected sex could get her pregnant but because before then, she had been experiencing her regular menstrual cramps for more than two weeks even after missing her period. She felt her period was late and would come until two weeks digressed into three before she grudgingly carried out the test that gave her the shock of her life.
Well, Amaka’s case may not be the first, but most women are unaware about some similar pregnancy and PMS symptoms. Symptoms of early pregnancy can be similar to those experienced by women before their menstrual period. Some of them are:
1. Cramps
You know the kind of cramps you experience before seeing your period, well its similar to pregnancy. If you have PMS you may experience cramps between 24 to 72 hours before your period and with time, it reduces and goes away before your period. Cramping in pregnancy although similar, may feel like your normal menstrual cramps and it happens during the early days of pregnancy. However, the pains may be in your lower stomach or back.
2. Bleeding
The main essence of PMS is to lose blood. For PMS you experience bleeding, it is quite intense and it may last for up to a week, depending on your body type. Bleeding in pregnancy is light and is called spotting. This happens between 10 to 14 days after conception and is not enough to make your pads drip.
3. Breast sensitivity
This is perhaps the trickiest symptom. During PMS for most women the breasts become swollen and tender. Tenderness ranges from mild to severe and reaches its intensity right before the period. However, during pregnancy the breasts become full and tender but sore. The soreness and pain distinguishes it from the regular PMS breast sensitivity.
4. Mood Swings
This is one symptom similar to both PMS and pregnancy. You may feel irritability, anxiety, depression or uncontrollable crying spells. The changes in mood is quite unplanned and happens in both conditions.
5. Constipation
The urge to use the toilet may become increased during PMS, that is because the hormone progesterone can lead to digestive disturbances including constipation. This is because levels of progesterone rise during the second half of the menstrual cycle. Constipation is present in women with PMS or women in early pregnancy.
6. Food cravings and aversions
Whenever I’m about to see my period I undergo an unexplained craving for anything edible with an increased appetite. Well, let’s not get this twisted because food cravings and aversion are typical to pregnancy. Although, the cravings during pregnancy are more specific than that of PMS.
7. Back pain
Well, before you wave a finger to that intense back pain and liken it to your PMS, you may need to make sure you are not expecting. This is one of the clear symptoms that you are expecting, back pains for PMS do not last as long as that of pregnancy and go away after the period begins.