24 Jul Jude Law and Rachel Weisz : Enemy at the Gate 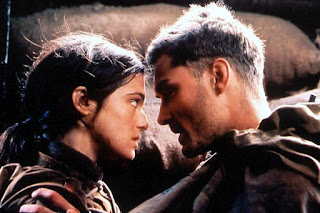 She snuck up to him..where he laid in heavy khaki amidst other khaki-clad bodies. They looked at each other for an-hour-long minute. It was clear. The unspoken consent. They both wanted it. They've been waiting for that moment. It was inevitable.

She touched him first… His hand. The one without the glove. Then she pulled his shirts back and bent to place one cold kiss on his belly. Gently,trying to make as little noise as possible,she unhooked his khaki trousers,removed her left glove,and slipped one white delicate,cold hand into his draws.

His body shivered from the expected coldness. The feeling,so powerful that she had to stop his moans with a kiss. Together, they struggled out of their grey pants. He moved to cover her nakedness with his body and blanket. Just then,a comrade passed by trying to light a match and totally oblivious to the fire burning in their loins.

The minute he was gone,he slipped himself into her in one thrust. Her eyes widened in surprise and unexpected pleasure. Their lips,locked in an attempt to muffle their sounds. Their bodies,locked in tight embrace. Her hands on his rocking waist. His hands,holding her in place. Together,they moved to the rhythm of their desires.

And when they came.. They did together. His left hand holding her head in place. Their lips locked again. And then it was over. As silent as it had begun. In that moment,the war outside was on hold. They were the only ones in the world 🙂

Sent from my BlackBerry wireless device from MTN