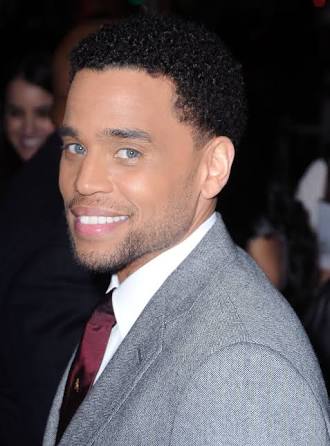 Posted at 11:50h in More, Spotlight by Tife 0 Comments
Share

Now I know why I all about my man crush, man candy Michael Ealy, whose real name is Michael Brown? We have the same astrology sign, we are both LEO!!!

The first time I notice Michael Ealy was in the movie “The Perfect Guy” and his trademark blue eyes caught my attention the whole time. I will not leave out his perfect pink lips, when he smacks them and winks OMG!!! It just takes your breath away. Let’s not forget that our man candy today, Michael Ealy, has a great physique, and could pass for a Roman solder.

Michael made a bold move on social media by posting a picture of his wife, Khatira Rafiqzada, with the caption #NoMuslimBan, to protest against U.S president Trump’s Muslim ban. He has also spoken against the ban on transgender people in the U.S army and against the recent #charlottesville riot.

When asked if he could imagine doing anything else apart from acting, he answered: “Teaching. When I was in college, I was an English major and my last year or so, I tutored high school students in reading and writing. After I got into acting, I said to myself, where does your real passion lie, and if you do the teaching route will you say ‘what if?’ when you are forty and regret you didn’t act. I thought, “Hell yeah, I would regret.”

His most popular movies include ‘Think Like a Man’, ‘The Perfect Guy’, ‘Secret and Lies’, ‘About Last Night’, ‘Takers’.

He won the 2006 Black Reel award as Best actor in the movie; Their Eyes Were Watching God.

He won the 2002 Washington Area Film Critics Award for Best Ensemble in the movie; Barbershop.

Michael was nominated in 2007 Golden Globe U.S Awards. This year he was nominated for Black Reel Award for Outstanding Actor in the movie; Secrets and Lies.