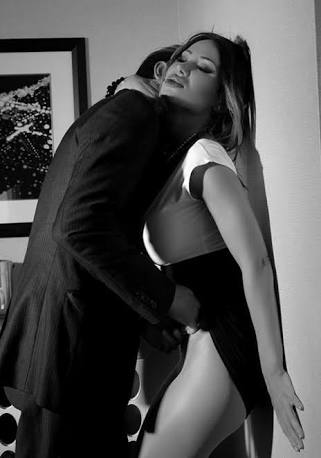 Posted at 15:02h in Erotica by Tife 0 Comments
Share

Katie was excited, she couldn’t sleep all night. She and Sean had been chatting for over 3 hours now and it was almost day break. She couldn’t keep her mind off the last thing he told her over the chat “I’m gonna make you wet the documents on my office table with your cum.” This made heart flutter and made her bite her lips even harder. The thoughts of two of them in his office after 4 weeks apart was enough to make her wet. She only hoped and prayed what happened in his office the last time doesn’t repeat itself this time. The last time she was in his office, things were already freaky, and he already had his tongue deep inside her wet pussy and his lips massaging her clits when he got a call from his secretary, informing him of an emergency meeting he had with the company’s CEO immediately. She was way beyond disappointed he had to leave her hanging at a crucial time like that but what even crushed her more was when he said “hang in there baby, wait for me. This meeting would only be for a few minutes” and he left her in the office, only for him to return 5 hours later. By then she had already helped herself. The vibration mode in his Nokia phone came in handy. She left his office angry and frustrated. He made it up to her by getting her a very expensive perfume as an apology gift, but they had not been intimate since then and this time she hoped he would fulfill his promise. He said he wanted her to stain the documents on his office desk with her cum, the thoughts of this made her wet as she closed her eyes to catch whatever sleep she could before daybreak.

Sean and Katie had been dating for over a year now and there was no doubt Sean loved Katie, he was faithful to her and provided her financial needs. But there was trouble in their love story. Sean’s busy schedules at work was driving them apart and even though he tries to make it up to her by buying her expensive gift and  giving her a gold credit card, but sometime those are not all a girl craves for. Her body had needs and she was trying hard to make sure Sean was the only one who satisfied her sexual needs, but there is little a girl can handle.

By the time Sean got to work in the morning, his best friend Jason was already waiting for him at the lobby. He had totally forgot he asked Jason to come in that morning for a business meeting. The meeting between friends went longer than they had expected and Jason was still in his office by 1pm. There was no rush as the friends had their meeting peacefully and relaxed. Sean had completely forgot it was already his lunch break, the same time he asked his girlfriend Katie to come over.

Katie was already soaking wet horny as she walked the stairs to Sean’s office in her stilettos. She wore a sexy low cut V-neck, cap sleeve white shirt, with a multi ruffled black penciled skirt and a black belt to go with. Her outfit as well as the fragrance from her Mark citrus bloom perfume made every eye turn as she walked pass them to Sean’s office. Sean’s secretary Rachael was not on seat when Katie arrived, so she went straight to Sean’s office without anybody to announce her arrival. She made her entrance into Sean’s office without knocking, surprising the men who were still discussing business, most especially Sean who completely forgot he asked his girlfriend to come to his office.

“Hey babe what are you doing here?”

“You can’t seriously have forgotten our chat last night” she replied vexatiously.

“Oh I’m sorry babe, why don’t you sit over at the couch and let me finish with Sean” he directed her to the couch at the corner of the office, where she sat. Jason could not respond to Katie greetings because he was dumbfounded. He had seen Katie a couple of times, but not this up close for him to be able to notice all of her features. From the low cut of her V-neck shirt, he was able to see her cleavage, and the shape of her breast. Her tight pencil skirt didn’t conceal her shape at all, as he was able to see all her curves and figure. He liked what he saw. He adjusted himself on his seat to have a proper view as Katie walked to the couch and crossed her well displayed clean shaved fair legs when she sat. Jason was carried away, he was already having an erection and a bulge was already forming in his pants before Sean drew his attention back to their discussion, but he could no longer concentrate due to the distraction behind him.

Not sooner than 5 minutes later his secretary called to inform him that the CEO needed him in his office urgently. Katie rolled her eyes on this information, what she had feared had befallen her again. She was very upset but didn’t want to show it in the presence of Jason. Sean left the office telling them to stay put he would be right back, Katie knew better than to believe him.

When Sean left the office Katie let out a loud hiss, and Jason turned his chair to face her on the couch.

“I can tell you are very upset” he paused and waited for Katie to give a response, but when he saw she was not giving a reply he continued.

“It seems like you had an important appointment with Sean today, but by look of it things are not going the way you planned.”

Katie shifted her gaze to him, he caught her attention with his statement, and it seemed he was interested in her, she saw him smack his lips when she first entered was that a bulge form under his pants. She smiled and decided to respond to him.

“Maybe you could help me out” she responded.

“How may I be of service to you my lady” he asked with sarcasm.

“I would have loved too, but not here and now, Sean can walk in on us any minute”

“That’s not a problem. Here and now is perfect. If I know Sean well, I know right about now he is busy with is boss, and he is not returning here for the next two hours.” She stood and walked up to him as she spoke. She got to where he sat and sat on him facing him. She began to kiss him.

Jason interrupted the kisses when he spoke. ” You should probably lock the door first.”

“Great idea” she went to lock the door and resumed her position on his laps. They started kissing with lust and desire. Jason covered her mouth with his in hungry kisses, his hand clapped into the back of her hair, pressing in hard. After a few seconds he stopped.

“Did you hear that?” he asked

“Go check the door” he responded.

Katie stood up to eavesdrop if there was anybody at the door, but there wasn’t instead she stood there whining her waist as she pulled out her pink G-string panties. She tossed it at him and beckoned to him to come get her. Jason shoved the underwear in his pocket and dashed towards her. He got to her and turned her around with a force. She almost slammed her face at the door. With her back at him, Jason planted kisses on her neck, at the same time chewing her neck softly. He thrust his hand inside her shirt and brought out her breast. He fondled it and shoved his other hand beneath her skirt to her already soaked pussy. He shoved his middle finger inside her and used his index finger to massage her clitoris. She moaned with pleasure and excitement, a man was finally touching her after all these while. Jason tossed her around so he could suck her breast, and she started unzipping his pants to release his dick. He tossed her around, and she placed her hands on the door. He ached her pelvis backwards towards him and pulled up her skirt, and instantly thrust his dick inside her pussy, feeling the lubricious, wonderfully sweet warm tightness that encompassed the length and breadth of his penis. Katie brought her hands to his neck prodding her nails into his skin, again forcing their bodies closer he pushed deeper into her, in a pumping rhythm he moved his pelvis, harder, faster, forward and back. His pelvis and penis jerked forward and backwards. Everything stood perfectly still.

“We should stop” he said trying to catch his breath.

“No, no, no, we still have about 30 minutes more” she dragged him to the couch, made him sit while she sat on him and rode the cowgirl style. Her titties bouncing up and down in front of him was a tactile and visual delight. Katie preferred this position because she could control the depth of penetration and the speed. She also liked to watch his expression as she fucked him.

“I’m sorry I had to wait for an impromptu meeting with my boss”  Sean started apologizing. Katie picked up her purse and left his office without saying a word. Jason also gave an excuse and left the office leaving Sean to wonder what happened in his absence.