Posted at 20:27h in Erotica, More by Sisi 2 Comments
Share 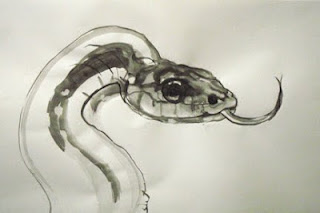 I was still shaking with panic and fear. I started sending her auto messages begging her to call back but she didn't care to reply or call. I assumed she was close and I continued down the road..half-walking,half-running. I was hoping to meet her halfway and I did. She looked at me first like I'd gone mad and asked me what was wrong. I told her,I said " there's a snake in the house" like three times in my native tongue.

She looked at me,almost laughing and asked me again. I didn't mind so I repeated myself,holding back the expletives on my tongue. Her first reaction was a long hissing sound. Then she laughed,shook her head,laughed some more and then asked if that was all. Infact,she said "is that all? Is that why you look like you were attacked by mad men?" I looked at her without understanding.

She moved me aside and continued walking towards the house. I stood rooted on the spot,looking at her receding back. Somewhere in my mind,I repeated to myself what I just told her. Then I asked myself if I said it wrongly. Or left out the word "snake". I shook my head to clear the fog. And looked at her again. She was almost close to the house. Did she not hear me? "There is a snake in that house!" I screamed,running to catch up with her and maybe stop her from going in.

She looked at me like I was wearing a thong on my head and then screamed at me to stop screaming. If I didn't know my own mother,I would have sworn she was drunk. Why else would you want to go into a house with a snake in it? I continued walking towards her and the house. She stood outside and beckoned me to come closer. Then she asked where my dad was. I told her. He was at a meeting. Not anywhere close to the house. Ok,she said. She passed her bag to me and started walking back the way she came.

"Where are u going this time!" I shouted. She laughed and told me to wait. She would be back soon,she said. She told me not to start running around like a mad woman before she comes back. I was to shocked to reply. I watched her go and stood there waiting till she came back with a host of men. Most of them were men working on building sites. And they came armed with bricklaying tools and gory stories of snakes and whatever.

After 20mins of loud noises and cursing.. They came out empty handed. I wasn't surprised. The snake couldn't have been sitting on the couch watching tv. Plus they'd made too much noise anyway. To make it worse,the empty barrels didn't go away immediately. They stayed back sharing and trading snake jokes at my heart's expense. I watched with slightly concealed irritation. Some of them even claimed the snake had gone and wasn't in the house anymore.

I snorted at that. I wasn't about to enter that house till someone comes out with a dead snake hanging on a pole. I waited patiently till they'd gone and continued waiting despite my mum's teasing. I told her what I was waiting for and who I was waiting for. My father. My hero. He would know where to look. What to do. She laughed and called me silly names and assured me that the snake was gone. But it turned out that I was right and she was wrong.

My Poppa came. Like my knight in shining armor. He was initially irritated at finding me sitting outside with no shoes on and my skirt almost riding up to my waist..but he cooled down when he heard my story and immediately went to work. Ten minutes later,my knight came out with a snake,half-dead..hanging loosely on a cutlass with its head almost completely chopped off. He cut it into pieces and burned it up till I could breath normally again.

I've never forgotten that day. My fear for snakes has not diminished although my faith in my dad has..greatly. This blog was inspired by a question from one of my readers and friend.