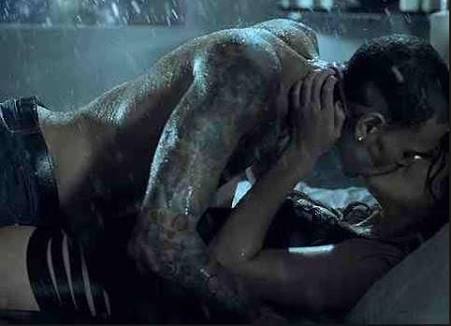 Posted at 20:48h in Erotica by Tife 0 Comments
Share

“I just wanna feel your body on me”, as Rita Ora and Chris Brown sang in the background. The cold breeze from the window flowing down Segun’s spine, He felt “the chills” on his body as “Body on me” continued to play. The skies looked grey and got darker as the rain touched the ground, “rat-tat-tat” falling heavily. Segun lay on his bed enjoying this next to paradise feeling, thinking of how the day could get any better. His doorbell rang.

“Who could that be in this rain?” Segun thought to himself.

He grudgingly stood up with no enthusiasm, without putting on any shirt. Segun had the body of an Adonis god, with abs that could make him a Spartan warrior. His long arms coupled with biceps like that of Pop eye the sailor man. He stood at a solid 6ft5 that made him every girls dream. He had a handsome face, piercing big black eyes that could melt an iceberg, and when he smiled the world literally stood still. All of these with a well cut jawline he covered with facial hair, “beard gang.”

The Bell rang endlessly, “hang on!!” he said as he approached the door.

“It’s me”. Segun immediately recognized that voic. It was Khadijat who lived two blocks away.

“But this was unusual after all there was the rain for one.” Segun thought to himself.

But Khadijat’s perfect figure with lips as full as the moon and an overall petite goddess wasn’t bad company so he gladly invited her in.

“You kept me out for so long, were you still sleeping?” Khadijat said.

She brushed by his waist as she entered. She requested for his shirt as she was wet from the rain. He hurriedly brought one for her.

“You can change in there” pointing to his room.

Segun went to the kitchen to make hot tea for Khadijat. While she changed to his shirt that enveloped her, Segun was almost twice her size and she still was sexy in it.

“You done? I’m coming with hot tea.” Segun said as he walked in.

“Don’t be shy, come in” she said she smiled mischievously.

“Here’s your tea” Segun handed the cup to her.

“Awww you’re so nice” she collected the cup and softly touched his hands.

At this point Segun felt those chills from the window on his loins.

Meanwhile Khadijat thought to herself “How would I come all the way just for man clothes and tea when I could do all that by myself?”

She needed more and at this point, and Segun was ready to give more, his pants were burning with desire already.

Khadijat looking for an excuse to feel Segun’s well defined arms. Segun could see her nipples erect like two thumbs from his shirt she slipped into.

“So the cold is getting to you?” Segun asked with a hint of sarcasm.

Khadijat replied “Ehh Ehn, what about the bulge in your pants?” they both laughed.

Segun couldn’t take it anymore as he came at her like a lion would its prey. He kissed her round juicy full lips passionately.  He felt her body warm up to him. His cold hands wrapped her waist, chills permeated her body.  She vibrated with tremors like underneath the Earth of an erupting volcano as her “wetness” started to feel like “liquid hot magma”. Segun felt her burning up as he throbbed her ear lobes and canal with his warm tongue that sent mixed signals of tickles and sweet sensations to her brain that had Segun written all over it.  His lips and tongue were working their magic on her upper body. His fingers found her inner labia already moist and warm, he found her clits and played it like Carlos Santana guitar on “Wild thoughts.”

Segun hitting every note on the ‘grand piano’ with his fingers, it felt like “Handel’s Messiah.” Khadijat at this point was already a fountain at her center. Segun’s lips moved south to her neck, kissing it down to the centre of her breasts with the other hand squeezing on the twins. Khadijat made loud moans and mumbling unrecognizable utterances. Segun knew what he was doing. She gently bit his ear lobes that sent surging electric rush to his already erect penis. Segun’s mouth devoured Khadijat’s pink nipples and as he sucked on them they became more tender. He felt them growing harder in his mouth.

By this time, Segun’s fingers had turn into turbines as they were circulating in her flower. He decided to kiss her further down from her breasts to her belly button with his tongue probing. She moaned even louder. By this time his lips nibbled around her outer lips, teasing her vulva and clitoris his lips and fingers meet finding an equilibrium with ecstasy. He continued to suck on her slowly with the instructions of her moans and her hands directing his head. Khadijat went to seventh heaven and back.