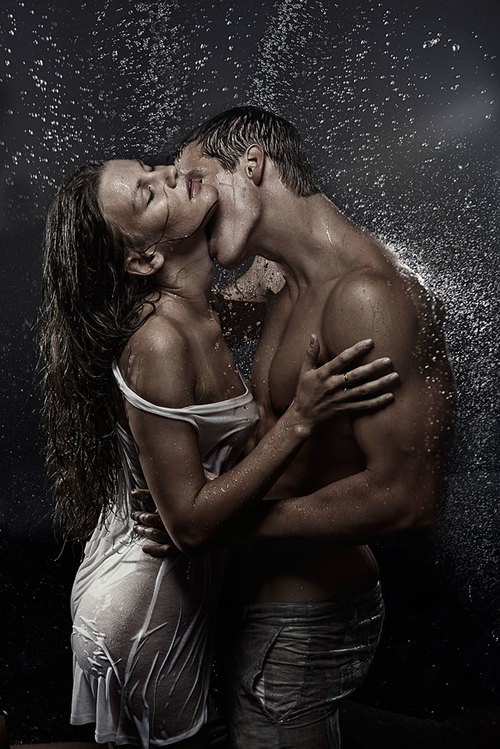 Posted at 23:43h in Erotica by Tife 0 Comments
Share

Continued from;  sex in the rain pt1

Khadijat’s heart raced like a horse on the track. She had found her release and she wanted to involve Segun in this space continuum of joy and ecstasy he had just taking her on.

She gently pulled him up from underneath her slowly, planting a warm kiss on his hardworking lips and tongue, still tasting some of her juices in his mouth. He give a loud moan of appreciation. The kiss intensified as Khadijat ran her fingers through Segun’s perfectly ripped chest and ‘abs’ which had other contours that confused Khadijat.

She thought to herself “How Segun was so sexy?” and could not wait to take all of him inside all of her.

By this time, her hands were already on Segun’s penis, it felt warm with blood rushing down there, and she could feel him get harder. Segun started to feel ‘the chills’ against his spine to his core. Khadijat began to kiss Segun tenderly, and teasing his already erect penis with her hands. She was trying to properly warm it up so it could be ready for her mouth. Segun gave out deeper moans of passion as Khadijat wrapped both hands on his penis. Still rubbing harder this time against her breasts as it appeared Segun was making sweet love to her fully blown bosom.

She immediately put his penis into her mouth and let it stay there motionless. He felt the warm presence of Khadijat’s beautiful mouth which made his penis restless. It started to jerk at the feel of her tongue. Segun held her chin up to look him in the eye and he asked “are you done teasing?”

She looked at him with her sexy big brown eyes and with her busy mouth. She replied shaking her head in disagreement. She started to suck on Segun slowly and gradually picking up the pace, moving in ascending to descending order. Her fingers teased his scrotum through the sack. Segun moaned loudly and in unrecognizable mumbles out of pleasure and excitement. Khadijat’s tongue used as an instrument in teasing the tip of Segun’s penis in circular motion, She then slowly moved down the sides of his penis and back to the crown moving up and down as fast as possible.

Segun thought to himself “what a pro Khadijat is with her mouth.” He moaned louder.

His fantasies about her was becoming a reality. She carefully slid one of her fingers on her ‘clits’ then rubbed on it to give a dual sense of pleasure that misplaced Segun in desire.

At this point both parties were hungry for one another. Segun took Khadijat’s hand and raised her up and placed her on the bed. They were both naked. He spread her legs open and in one stroke he was inside her already moist, warm and tight vagina. It was everything he had ever imagined suddenly his moans coincided with those of the thunder and lightning outside his window. Meanwhile Khadijat became red as Segun filled up her walls. She held on tight onto the sheets like Friday the 13th and horror was coming. Segun started to stroke inside, on top of her grinding her in and out, gradually increasing the thrusts she ran wild with desire. He moved to kiss her as he penetrated her. Her hands gently left the sheets to wrap around his neck. Her hands probed downwards as she gently scratched his back while she kissed him back tenderly moaning in his mouth. Her legs were already wrapped on his waist, leaving both of them moaning loudly as he kissed her neck and she his collar bone.

Segun took up Khadijat’s legs and raised them up to his shoulders, while placing a pillow just underneath her back on her waist. With her body tilted up a bit creating a perfect entrance to the vagina, he began thrusting in and out. Khadijat screamed but gave him a look that said “Don’t stop baby, you’re in control.”

Segun was in there so hard she started to feel him in her throat. At this point Khadijat had released again with Segun feeling all of her ‘juices’ all over his penis. Nevertheless he continued to stroke harder with his hands nibbling her ‘clits’ while his penis rampaged her vagina’s canal with each stroke touching her ‘G’ notes.

Khadijat felt Segun sweating in her eyes despite the cold weather, it was time to switch positions so she climbed on top of him as if he were ‘The Mountain’ and started to grind him vertically and horizontally. The giggling of her bubbly breasts and pointy pink nipples made Segun harder inside her, her soft buttocks bounced on top of his loins that made his blood boil. He held her breasts as she rode him like a driver under the influence, then he grabbed her closer, carefully drilling holes into Khadijat as she came over and over, He could see it clearly this time. He didn’t stop, he continued to hit hard at this point it was becoming animal cruelty…

Both of them sweating profusely and uncontrollably he carried her with his penis still inside of her, to the window where the breeze and droplets of rain sprinkled on their faces he continued to drill her from below as he carried her on his arms with his big bulgy arms. At this point Khadijat couldn’t help herself as tears came rushing down her beautiful face. Segun felt his load coming so he put her down, going for one more. He carried her to the bed, she was on her kneels with her face down, elbows on the bed. Her buttocks faced him like a heart shape, her hips wide, he kissed her round buttocks and gently spread her legs leaving the vagina wide awake. His penis was still lubricated with her cum and with one stroke he was inside her one more time from behind. With his hands on her breasts, he stroked hard and harder at her command.

Khadijat stroked her ‘clit’ for maximum pleasure, she was also about to release. She started to feel vibrations inside of her as tears engulfed her eyes. She gushed out a fountain of spring from her vagina. Segun also came inside of her with that unexplainable feeling he had inside of him that he hadn’t felt in a while, they both had smiles on their faces. He kissed Khadijat and they both fell.