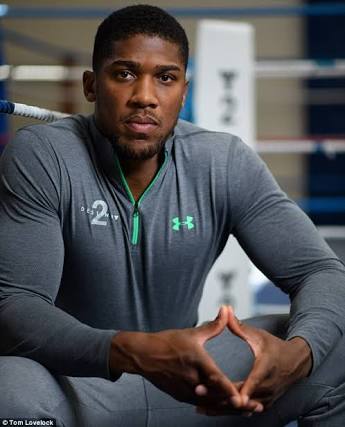 Posted at 12:15h in More, Spotlight by Tife 0 Comments
Share

Every lady has that picture perfect, ideal man in her head. For most women, the physical qualities are the same; tall, dark, handsome, strong, well built… etc. Well I might just have found a man who meets all those qualities and more, his name is Anthony Joshua.

Anthony Joshua is a British professional boxer. His full name is Anthony Oluwafemi Olaseni Joshua. Joshua was born in Watford to a Nigerian mother and a British father of Nigerian descent. Joshua didn’t just rise to stardom in the boxing profession, he had taken some rough rides to get to where he is today.

Joshua was formerly a bricklayer before taking up boxing full-time. In 2009, Joshua was sent to reading prison and was made to wear an electronic tag on his anklet when he was released, for what he describes as “fighting and other crazy stuffs”. In March 2011, he was pulled over by the police for speeding. He was found with 8 ounces of herbal cannabis. He was charged with possession with intent to supply, an offence that carries a maximum 14-year sentence. Joshua was suspended from GB boxing squad and was sentence to a 12-month community order and 100 hours’ unpaid work after pleading guilty.

But Joshua has used all the rough rides to take his career to a whole new dimension. Joshua has fought 20 fights with 20 wins and 0 losses. He has won numerous titles from his boxing career and gold medals representing England in the Olympics.

Our man crush isn’t just some frightful looking fighter. He is a well built, handsome looking, fair in complexion man. He wears his hair in a low-cut, full eyebrow, short beards and mustache. He has beautiful eye, huge shoulders with well distinct muscles that would make any woman drip with hot sweat. Joshua’s good looks can also be seen in his outfit, like when he shows up looking all “fly” in his suits.

Our man crush loves to eat healthy and he is interested in chess and reading, he says it’s a way to reinforce his boxing and tactical abilities