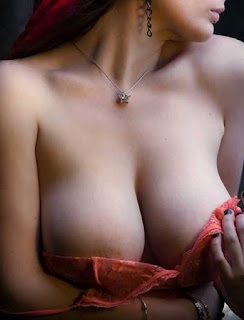 There's been many theories that have tried to describe the relationship boys have with boobies. Their insane,mad love for the twins. Some say its because of their hidden visibility..lol. Like they are hidden but u can still see them. Some anthropologists say its because they look like buttocks and cave men used to really dig buttocks. Whatever that means..lol. Some say its pro'ly due to lack of breast feeding or too much of it. All I know is,no man has ever been repulsed by my twins. In fact,no man has been able to resist it..*shrugs* *adjust bra*

Anyways I got a list of reasons why men love boobs

•They feel good to touch.

•They respond to touch.

•They're fun to play with.

•They feed your babies.

•They represent life and health and motherhood.

•You don't have them.

•No two pairs are alike.

Lol.. Darn it! No one really knows why but we don't mind either. Jiggle them,fondle them,slap them,pinch them.. Just keep loving them. You won't hear us complain.

Sent from my BlackBerry wireless device from MTN